A good tree bears good fruit.  Those are Jesus’ words.  A good apple tree makes good apples.  And sitting in every one of those apples is the potential for an entirely new tree.  Every tree contains a forest.

We view our students in much the same way.  Campus ministry is not a “holding tank” for Christian students.  It is not our goal to provide a college youth group to keep Christians safe while in college.  Quite the opposite.  It’s our hope to inspire students to believe they are Kingdom workers – future missionaries and elders and deacons and pastors and world-changers.  They are the ones who will spread deep roots and bear the fruit that is the start of a new forest.

This is why we see discipleship as the engine of our ministry.  It’s why we have focused a great deal on finding real ways for students to serve and grow.  In the half-century that Encounter has been alive, we’ve seen many generations come, be transformed and leave to transform others.  It has happened.  It’s happening right now.  And, by His grace, it will continue.  Isn’t that just like the Lord?  We invest deeply in our little corner and He somehow uses that to change the world. 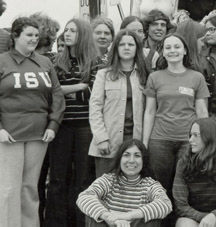 Encounter (first known as Christian Collegians) was founded at Illinois State University in 1968. What began as a small collaboration between students and local churches has, over the years, grown into a parachurch ministry with significant impact both on campus and beyond.

The first campus minister of “Christian Collegians” was David Lang, a well known author and publisher. Under his leadership, a two story house was purchased near campus at 300 Normal Ave, near the Bone Student Center. David was succeeded by Jim Simkins in 1973, who rallied students and supporters to put a new building on the ministry property that was more conducive to student life. Jim led the ministry for 23 years.

In 1996, Pete Cocco was hired, after he and his wife Paulette had previously spent back to back years in Hungary and the Philippines.  In ’99, the name of the group was updated from “Christian Collegians” to “Encounter.” And 2004 marked the expansion of the staff team, when Ben and Joanne Miller moved from EIU to join Pete.  Since that time, the staff team has grown and expanded significantly.

Over the past two decades, Encounter has planted three campus ministries in the Philippines. Each of those ministries has full time Filipino staff, all a part of our budget and given oversight by our Board of Directors. Arnold Pasion, a native of Baguio on the island of Luzon, is our director there.

Beyond the details above, there have been countless volunteers and students that have made this place thrive – years of changed lives that have provided the nourishing soil for others to grow and deepen their faith.  Our desire is to continue to be a rooted, thriving ministry for college students at Illinois State, to press Jesus deep into them so that the Gospel will take root in every corner of the world!

The sole basis for our belief is the sixty-six books of the Bible, which is uniquely God-inspired, without error in the original manuscripts, and the final authority on all matters of faith and practice (II Timothy 3:15-17; Hebrews 4:12; II Peter 1:20-21).

We teach that there is but one true and living God (Deuteronomy 6:4; Isaiah 45:5-7; I Corinthians 8:4), perfect in all His attributes, one in essence, eternally existing in three persons: Father, Son and Holy Spirit (Matthew 28:19; II Corinthians 13:14), each possessing all the attributes of deity and deserving of our worship and obedience. In the beginning God created out of nothing the universe and all things therein, thus manifesting the glory of His power, wisdom, and goodness. By His sovereign power, He continues to sustain His creation. By His providence, He is operating throughout history to fulfill His plan of redemption.

We teach that the Holy Spirit is a divine person, coequal with the Father and the Son in all the divine attributes (Matthew 28:19; I Corinthians 12:4-6; II Corinthians 13:14). He enlightens the minds of sinners, awakens in them a recognition of their need of a Savior and regenerates them. At the point of salvation, He permanently indwells every believer and equips them for personal growth and for personal service/ministry within the body of Christ (John 16:7-9; Acts 2:38; I Corinthians 12:13; II Corinthians 3:18; Ephesians 2:22). The indwelling of the Spirit is a divine guarantee which seals the believer unto the day of redemption (Romans 8:9; Ephesians 1:13-14). Christians are endowed with spiritual gifts through the sovereign act of the Holy Spirit. These gifts are intended to strengthen the Church and glorify God (John 16:13-14; Acts 1:8; I Corinthians 12:4-11; II Corinthians 3:18).

The central purpose of God’s revelation in Scripture is to call all people into fellowship with Himself. God originally created humans to have fellowship with Him and to glorify Him (Isaiah 43:7; Colossians 1:16), but they defied God by sinfully choosing to go their own way. As a result, man suffered alienation from God and the corruption of human nature (Psalm 51:5; Romans 3:23; Ephesians 2:1-4). The salvation of mankind, therefore, is wholly a work of God’s free gift of grace, not the result in whole or in part of human works or goodness. This salvation is a gift, made available through faith in Jesus Christ and Him alone (John 1:12; 10:18-27; 14:6; Acts 4:12; Ephesians 1:7; 2:8-9; I Peter 1:18-19).

We teach that all who genuinely place their faith in Jesus Christ are placed by the Holy Spirit into one united spiritual body, the church (I Corinthians 12:12-13), the bride of Christ (II Corinthians 11:2), of which Christ is the head (Ephesians 1:22; Colossians 1:18).  The Scripture calls believers to gather together to devote themselves to worship, prayer, teaching of the Word, observance of the ordinances, fellowship, service to the body, and outreach to the world (Acts 1:8; Acts 2:38-42; Ephesians 4:12).  Wherever God’s people meet regularly in obedience to this command, there is the local expression of the church (Acts 20:17; Galatians 1:2; Hebrews 10:25). The members of the body are to work together in love and unity, intent on the ultimate purpose of glorifying Christ and making disciples of all nations (Matthew 28:18-20; John 17; Ephesians 3:21).

We teach that two ordinances have been committed to the local church: The Lord’s Supper, and Baptism.  We teach that the Lord’s Supper is the commemoration and proclamation of His Death until He comes, and should always be preceded by solemn self-examination (I Corinthians 11:28-32). We also teach that whereas the elements of communion are only representative of the flesh and blood of Christ, the Lord’s Supper is nevertheless an actual communion with the risen Christ, who is present in a unique way, fellowshipping with His people (I Corinthians 10:16).  Because baptism is commanded by our Lord and His apostles (Matthew 28:19; Acts 2:38), we teach that all professed believers are compelled to be baptized. We teach that baptism should occur immediately upon confession of faith in Christ, as modeled for us in Acts (2:38-41; 8:35-39; 16:31-33). Baptism as an immersion is taught in Scripture and symbolically portrays the death, burial and resurrection of Jesus Christ. It is also a sign of fellowship and identification with the Church, which is the visible body of Christ (Acts 2:41-42).

Death seals the eternal destiny of each person. For all mankind, there will be a resurrection of the body into the spiritual world, and a judgment that will determine the fate of each individual. The saved will be raised to eternal life and will be rewarded on the basis the life already lived for God (John 6:39; Romans 8:10-11, 19-23; II Corinthians 4:14), and the unsaved to judgment and everlasting punishment (Daniel 12:2; John 5:29)